Toys can be useful for developing interest in STEM in 8-year-olds (or 5-year olds). However, it’s important to emphasize that there is little proof that expensive toys help children learn more. Just engaging your child’s imagination about STEM-related ideas is enough. You are enough.

Keeping this in mind, in this article, I will outline some STEM toys and what kind of scientific concepts they might teach a child.

LAYMN is reader-supported. When you buy through links on our site, we may earn an affiliate commission.

In theory, the best toys are those that include multiple levels of complexity. So the child can engage with the toy at their own level of ability and grow with the toy.

Take for instance the Wooden Ferris Wheel DIY kit, which challenges spatial thinking, fine motor skills at assembly, or color perception during painting. The company states that it’s for kids ages 8 and up, but children develop differently and might have different preferences. 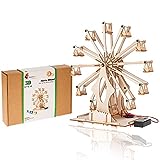 So you might be better off showing the toy to the child and gauging their interest before buying.

What makes this toy great is the great variety of configurations – twelve different robots. Furthermore, it teaches us that life on earth is only possible thanks to the Sun’s light.

Although, I have to point out that this is also a complex toy. A child needs to understand how electricity moves, and modern digital toys do not offer that. I would rather recommend disassembling old radios with batteries where electrical engineering is more easily understood. 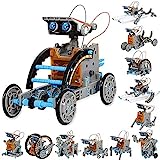 This is something that Richard Feynman also points out in one of his autobiographies. That the radios in his childhood were simpler and much more easily understood.

My great-grandmother did not have a lot of toys. But out of the few toys that she did have our favorite was probably the domino.

Although dominos nowadays are mostly known for intricate chain reactions, which is a useful lesson in basic physics on its own, the actual game teaches familiarity with basic numeracy and engaging others co-operatively. 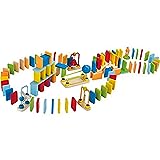 Now one could use the ice cream or lollipop sticks and matches (fire hazard) to have a go at engineering, but all of those require extra work to clean or an adult to watch over.

An alternative arises via the Thames & Kosmos Structural Engineering kit. Kids ages 8 to 14 could try their hand at building actual structures such as bridges, radio towers, or buildings. The best way to learn to do something is by doing the actual something you want to accomplish.

Transference of skills does exist, but even better is direct experience. So if your child wants to become an engineer, it is best to give them toys that mimic real life as close as possible and not some odd abstraction.

The great thing about Brain Flakes 500 is that it’s simple. But just because it’s simple does not mean that it cannot teach great complexity.

A child might struggle to think of something on their own, therefore it is important to expose them to a variety of experiences. This way they will have a memory to refer to when deciding what to build. Furthermore, since there are so many of them and they are interchangeable, nothing will be broken if they get lost in a random vacuuming incident. 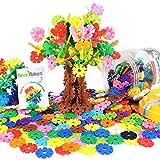 I personally love the branding of Kiwico. It was founded by Sandra Oh Lin, who has a background in chemical engineering. Unlike a lot of companies out now in the kid’s toys space, they really seem to have a sincere appreciation for STEM education.

At least they market themselves as they do. Although the shipping is not as fast as you might get from Amazon, the variety of toys for different ages and attention to detail gives them enough merit to justify their place high up on this list.

The Matatalab Coding Robot is not a simple toy. It can teach the concept of programming, but this skill is not directly transferable to real programming. Children will still need additional help with learning programming languages because they are not as user-friendly.

I know this because my nephew has gone to computer programming classes for kids, which use similar principles. And I know that he struggles with actual programming languages because even setting them up requires a lot more work than even adults like doing. 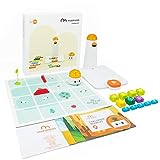 Children develop differently. When choosing the best toy for your child you might want to consider where they are currently with their knowledge and understanding of the world. You might want a toy that is in their proximal zone of development so they can learn efficiently. There is no use asking your child to do something they do not have the ability to do yet. But most importantly the literature on child development suggests that it’s most important to communicate a lot with your child. Just talk with your child and give them something interesting to imagine. If you do that who knows they might be the next brilliant physicist.

Siim Andres
Master's degree in psychology. Loves British comedy, philosophy of science and art from the golden age of illustration.

Attention!
LAYMN is venturing to the frontiers of human experience. In doing so, we expect to make mistakes. Please let us know if you find an error.

By continuing to use the site, you agree to the use of cookies. more information